Voted Off the Island!

At capacity at the warehouse.  It was time to vote a car off the island.  Adios, Datsun!

A Pair of Porsches

We loved our Audi All Road, but after one too many major repairs, the last of which was irreparable, we decided it was time for a new family car.  Even while Rich was trading in the Audi, the suspension seemed to give out again.  I don't think he has ever peeled out of a parking lot faster than that day!  Now we love our new 2011 Toyota Highlander Hybrid.  So efficient and comfy.  It's been fun being able to load up a pile of kids on a whim and not freak out too much when they trail in goose poop.

Sadly, the 1985 Mercedes 190 Cosworth was totalled.  My nephew was borrowing it when he got rear ended at a stop light.  A little bittersweet, because now Rich has an excuse to buy another car to replace it... What will it be?

The everyday cars: Audi All Road and Prius.

Why does Lucy ever leave Rich by himself with the kids? Nothing surprises Lucy any more after Rich bought a car while Lucy was in Spain. This time, while the girls are skiing and the boys are stuck snowed in the house, Rich buys two more cars: a 1981 Honda Accord (very clean Berkeley professor's car, classic 80s) and a 1986 Alfa Romeo GTV6.

Rich buys back his very first new car out of college from his buddy Marc. We had our first date in this 1992 Honda Prelude! If you don't believe it, go back to my July 1992 Car Count page! Read Rich's account of the story.

Rich picked up this 1995 VW Eurovan Camper from another father who had lots of fun memories driving everywhere in it with his now grown-up kids.

I see some car camping in our future...

After waiting two long years, Rich picked up his most highly anticipated car, the 2008 Tesla Roadster.

Describes Rich: The only blingy car that doesn't brand you as a tool when you drive the streets of Berkeley.

To celebrate Obama's election (any excuse is a good excuse to buy a car), this 1971 Lancia Fulvia Berlina S is car #15. Says Rich, "OK, I now officially have too many cars." Wo.

Who can go to Monterey Car Week and resist buying a car?

Certainly not my husband.

Um, we seem to be acquiring a new car every other month. Rich has added a 13th car, a 1972 Mercedes 280SE, owned for 30 years by winemaker Rodney Strong and in really great condition.

Guess I should have known better.

Perhaps inspired by the upcoming high school reunion, bought a 1988 BMW M5, and a "parts car" for its repair, sneaking his way into double digit car ownership probably to see if I'd go ballistic
Car Count: 10

August 2007: sadly, sold the 2002 Porsche 911 Carrera 4 Cabriolet; when told that the Porsche was going away, Isabella protests "Noooooo! I want the Porsche to stay here forEVER!!!"; Rich must sneak out when the truck arrives to take it away, lest he must deal with her melt down which doesn't help his own mixed feelings about this sale; does this mean Lucy is making Rich consolidate cars? no, she had nothing to do with this; Rich is "making room for a new one"...
Car Count: 8


September 2006: added another air cooled engine to the collection, the 1973.5 Porsche 911T (ask Rich the significance of the ".5"); I think the nickname for this car is Sammy Hagar because the previous owner looked like him...

August 2006: surprise! we take ownership of a 1966 Jaguar XKE; this is the first car I've met that had its own professional pictures taken; even I have to admit that it is a neat car 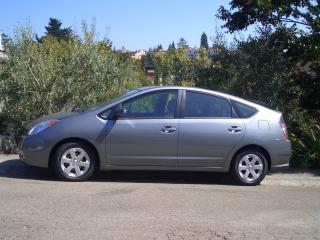 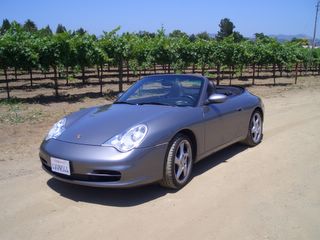 March 2005 - officially sold the Forester (remember: its assumed sale was the reason the Audi was bought); it was being used by a friend since December 2004
Car Count: 5 (SVX, Golf, Audi, Corvair, Jaguar 420G)

October 2004 - bought 2002 Audi Allroad without telling me; aka Mama Car (name given by Isabella)

February 2004 – bought 2000 Volkswagen Golf aka “Georg” (think from the Sound of Music); we "needed" another small car to replace the Miata since we have a baby now 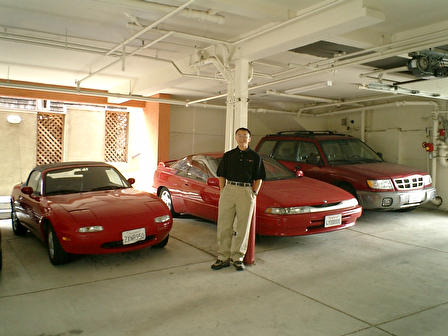 December 2002 – bought 1995 Surbaru SVX aka “The Sweet Ride"; you can drive with the windows down when it’s raining - wow; oy, we're already married so I'm stuck with it 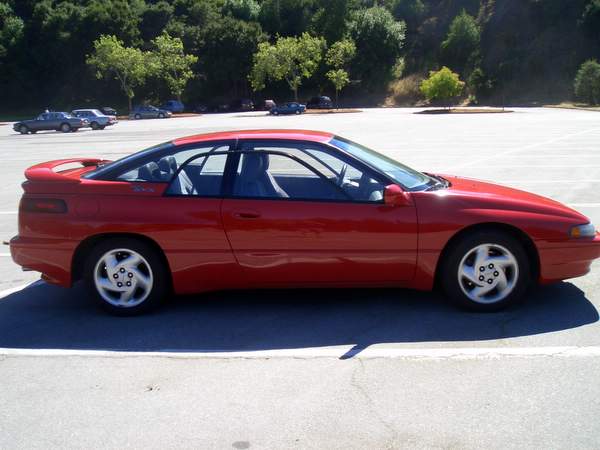 May 2002 – bought 1998 Subaru Forrester aka “Betty”, the name of the previous owner, also slang for a girl snowboarder which fits since we bought this all wheel drive car for drives to Tahoe 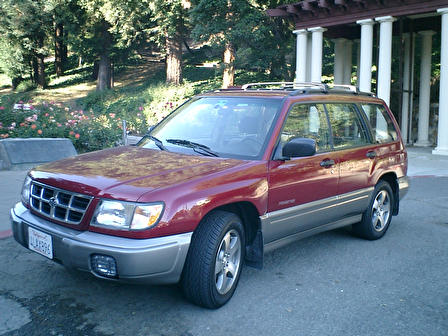 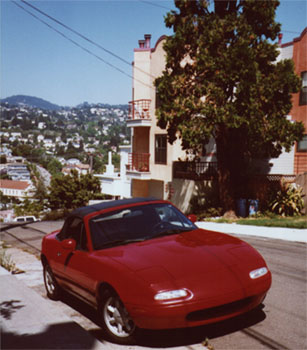 sometime in 1997 - I divest out of Daddy-O, so official Daddy-O ownership is now between Josh, Denise and Rich
Car Count: 3.83 (Prelude, Corvair, Jaguar 420G, Colt, Cutlass)

February 1997 - bought 1967 Jaguar 420G within 3 months of me spending all of my money on the condo?! @#$%&! picnic tables inside are especially fun; we eventually rode in this car on our wedding day, so it's got special significance 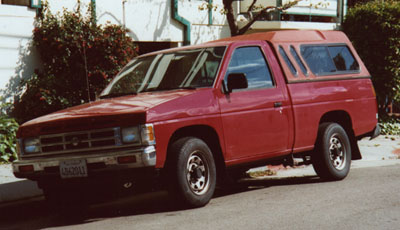 1994 - bought 1970 Oldsmobile Cutlass Supreme aka "Daddy-O"; jointly owned car with Josh, Denise, Rich and I; everyone in Oak-town keeps offering us $ for the car 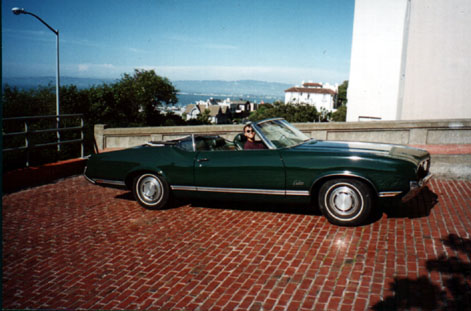 Summer 1993 - bought 1985 Honda Accord aka "Moochie"; used as a commuter whenever he had to go to Sacramento for work; license plate he got for it was "I < Heart > Ribs"
Car Count: 2 (Prelude, Accord)

July 1992 - bought new 1992 Honda Prelude aka “Gunther”; Rich was deciding between this car or the SVX; thank God he chose this car because I don't know if I'd date a guy who owned an SVX!
Car Count: 1 (Prelude)

Most pictures are on my Smugmug account. There are also a few pictures on Rich's site under "Playthings" and "The Chen Automobile Emporium"